Effective April 18, 2016, the Law on Expungements now permits a Petition for Expungement to be filed in a shorter period of time.

If you have any questions regarding the new expungement law or the procedure for the filing of a Petition for Expungement, the Law Office of Brian Goldenfarb can certainly answer any and all questions that you may have. Call (732) 321-9100 for a free initial consultation.

"Winning Isn't Everything, It is the ONLY thing."
- Vince Lombardi 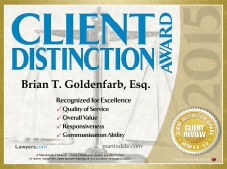